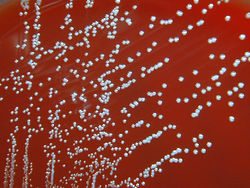 This disease can be transmitted in particular through vaginal secretions and semen from animals. Even though it remains uncommon in France and presents other modes of contamination, this disease therefore specifically concerns people who have sexual contact with animals. '

The following questions/answers have been compiled from the US Center for Disease Control FAQ (http://www.cdc.gov/ncidod/dbmd/diseaseinfo/Brucellosis_g.htm) and various other sources.

Brucellosis is an infectious disease caused by the bacteria "Brucella". This bacterium is transmitted mainly between animals and is the cause of diseases in various vertebrates. Several species of Brucella affect sheep, goats, cows, pigs or dogs as well as many other animals.

Humans can become infected from contact with animals or consumed animal products that contain this bacteria. In humans, brucellosis can cause different symptoms that are similar to the flu and which can include fevers, headaches or backaches, and physical weakness. Breucellosis can also cause persistent chronic symptoms which include fever, joint pain, and fatigue.

Brucellosis is uncommon in France where the disease is the subject of an eradication policy in farm animals which includes vaccination. Less than 50 cases are reported annually to the InVS (National Institute for Health Watch). On the other hand, it is endemic in the Mediterranean basin, in the Middle East, in West Asia, in Africa and in Latin America and in certain countries of Eastern Europe. Raw milk cheeses from these regions can be a source of infection.

How can Brucellosis be transmitted to humans and who presents a risk of infection?

Humans can be infected in three ways: by eating or drinking an animal product contaminated with the bacteria Brucella , by breathing in the bacteria, or by entering the bacteria through a scratch on the skin or through mucous membranes (genitalia, mouth).

The most common mode of contamination is food. When sheep, goats or camels are infected, their milk is contaminated with the bacteria. Unpasteurized milk (or cheese) can transmit the disease to humans.

Inhalation is not a usual route of transmission but it can occur during laboratory work on bacterial cultures or in slaughterhouses.

Can brucellosis be transmitted from man to man?

How to guard against infection?

By avoiding the consumption of unpasteurized products in areas at risk. Hunters and slaughterhouse workers should wear gloves when handling animal viscera.

'While there are vaccines in animals, there are none in humans.'

My dog ​​has been diagnosed with Brucellosis. What risk does this pose for me?

Brucella canis is a species of Brucella that can infect dogs. This species is occasionally transmitted to humans, but the vast majority of canine infections do not result in human infections. While veterinarians exposed to the blood of infected animals are considered at risk, this is not the case for pet owners. It is indeed rare for a pet owner to come into contact with a dog's blood, semen or placenta. 'This is however the case for people who have sexual contact with animals.'

The bacteria can be eliminated in animals within a few days of treatment. However, reinfection is frequent and some animal fluids remain infectious for several weeks. Immunocompromised people (cancer patients, HIV positive, or transplant patients) should avoid contact with dogs infected with Brucellosa canis .

What can be the symptoms of Brucellosis?

The most common forms (especially with Brucellosa abortus which is the form that affects cattle) show flu-like symptoms.

In pregnant women, acute brucellosis can cause abortion or premature delivery.

How is Brucellosis diagnosed?

Brucellosis is diagnosed in the laboratory by the discovery of the bacteria in blood or spinal cord samples. Blood tests for antibodies can also be carried out for this two samples must be taken two weeks apart.

Is there a treatment for Brucellosis?

Yes, but the treatment can be difficult. Effective antibiotics are prescribed. Usually "doxycycline" and "rifampicin" are used in combinations for six weeks to prevent the infection from coming back. Depending on the severity of the disease and the length of treatment, healing takes several weeks to several months. Mortality is low (less than 2%), and is usually associated with localization in the heart.

Post-exposure treatment also exists for people who have presented an identified risk of exposure.