Treatment of gastrointestinal infection in humans involves fluid rehydration, electrolyte replacement, and management of any pain. As of January 2015[update], nitazoxanide is the only drug approved for the treatment of cryptosporidiosis in immunocompetent hosts.[3] Supplemental zinc may improve symptoms,[3] particularly in recurrent or persistent infections or in others at risk for zinc deficiency. Cryptosporidium oocysts are 4–6 μm in diameter and exhibit partial acid-fast staining. They must be differentiated from other partially acid-fast organisms including Cyclospora cayetanensis.

Cryptosporidium causes cryptosporidiosis, an infection that may present as a diarrhoeal with or without a persistent cough in immunocompetent hosts.[1] Other apicomplexan pathogens include the malaria parasite Plasmodium and the toxoplasmosis parasite Toxoplasma. Unlike Plasmodium, which transmits via a mosquito vector, Cryptosporidium does not use an insect vector, and is capable of completing its lifecycle within a single host, resulting in cyst stages that are excreted in feces or through inhalation of coughed on fomites and are capable of transmission to a new host.[1][4][5]

Cryptosporidiosis is typically an acute, short-term infection, can be recurrent through reinfection in immunocompetent hosts, and become severe or life-threatening in immunocompromised individuals. In humans, it remains in the lower intestine and may remain for up to five weeks.[4] The parasite is transmitted by environmentally hardy cysts (oocysts) that, once ingested, exist in the small intestine and result in an infection of intestinal epithelial tissue.[4] Transmission by ingestion or inhalation of coughed on fomites is a second, less likely route of infection.[1]

The genome of Cryptosporidium parvum, sequenced in 2004, was found to be unusual amongst eukaryotes in that the mitochondria seem not to contain DNA.[6] A closely related species, C. hominis, also has its genome sequence available.[7] 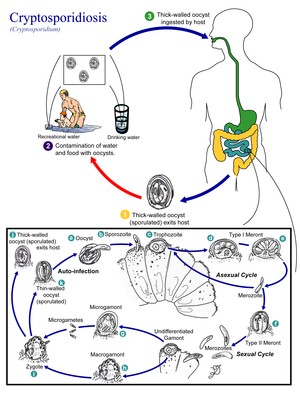 Cryptosporidium has three developmental stages: meronts, gamonts and oocysts.[8] They reproduce within the intestinal epithelial cells. [9] The Cryptosporidium spore phase (oocyst) can survive for lengthy periods outside a host. It can also resist many common disinfectants, notably chlorine-based disinfectants.[10]

One of the largest challenges in identifying outbreaks is the ability to verify the results in a laboratory. The oocytes may be seen by microscopic examination of a stool sample, but they may be confused with other objects or artifacts similar in appearance.[15] Most cryptosporidia are 3–6 μm in size, although some reports have described larger cells.[15]

Boiling is believed to be the safest option for water contaminated by Cryptosporidium.[16][17]

Dealing with stabilized compost - i.e. composting material that has gone through the phases where micro-organisms are digesting the organic matter and the temperature inside the composting pile has reached temperature up to 50-70ºC - poses very little risk as these temperatures kill pathogens and even make oocysts unviable. People turning the compost should wear gloves and a breathing mask as that material contains pathogens that can make humans sick. [20]

Cases of cryptosporidiosis can occur in a city with clean water; cases of cryptosporidiosis can have different origins. Like many fecal-oral pathogens, the disease can also be transmitted by contaminated food, poor hygiene or turning compost in a local compost site. Testing of water, as well as epidemiological study, are necessary to determine the sources of specific infections. Cryptosporidium typically does not cause serious illness in healthy people. It may chronically sicken some children, as well as adults exposed and immunocompromised. A subset of the immunocompromised population is people with AIDS. Amongst MSM with AIDS, insertive anal sex is an increased risk factor.[21] Analingus and oral-genital sex after anal-genital sex are known transmission routes.[22]

Other transmission routes include exposure to laboratory specimens.[22]