A brief word of introduction. The following document is in no way official, and these figures should not be taken as universal fact. There are doubtless many factors that I've not accounted for, which significantly affect the data. Also, this survey was aimed specifically at zoophiles (though this is a self-classification thing, and of the 25 respondents to complete both surveys, only 10 responded as not at all bestialist in the other survey). This version of the document was compiled on the 27th May 2000, at which point the total number of respondents stood at 49. This small sample size means only a brief analysis.

As might be expected, the majority of survey respondents were male. But perhaps a little more surprising is that only 5 (10.2%) of the 49 respondents were female, while according to 'net statistics a figure closer to 37% should have been expected. Some of this could be accounted for by the fact that this survey asked only zoophiles to respond, and the previous survey showed that fewer females claimed to be zoophiles than males. However, I suspect most of this is accounted for by the small sample size.

Time been a zoophile

Unfortunately, due to the way in which the Causes of Zoophilia questionnaire was designed, the only way to compare the two sets of data is to subtract the age the respondent realised their sexuality from their current age, which means these figures are only approximate. Nonetheless, it's the only way a comparison can be made. After the data has been processed as outlined above, for this survey the average time a respondent had been aware of their sexuality is 13.9 years, while for the Causes of Zoophilia survey the figure was 12.9 years. This isn't a significant enough difference when given the error margin to mean much of anything, in my opinion.

About the only interesting feature of this data is the difference between times for men and women; an average of 13.6 and 16.4 years respectively. This time gap of 2.8 years is matched in the Causes of Zoophilia survey by a gap of 1.8 years.

The table below shows the online activity of respondents, divided again by gender. It's interesting from this to see that more people are a member of a mailing list than exchange five or more e-mails a day. It also seems that there's a mailing list being run for every five people who claim to be members of one! I can only conclude from this that people very active in the 'zoo community' are more likely to have responded to this survey than zoophiles who aren't. Something else quite interesting, though perhaps just a result of so few respondents, is quite how active females seem to be online. Only ten percent of respondents are female, though 1 in 4 mailing-list owners and 1 in 5 web-site owners are female. Also, 18.2% of respondents exchanging more than 5 e-mails a day are female.

Country and area of residence

The graph to the left shows the estimated density of zoophilia by country. This has been calculated using that country's population and the survey respondents. Of course this isn't an accurate picture, as there are varying degrees of Internet access in different countries, and language and similar barriers to consider. Also, with the small number of respondents the only reasonable figures are those for the USA, the UK and Canada (29, 5 and 4 respondents respectively). This data is summarised below in table format. 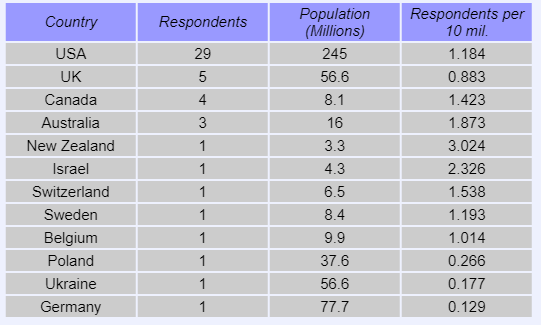 Looking at the above data, it's interesting to see that the country with the highest density is New Zealand, (something supported by common rumour) where there seem quite severe legal implications. And the country with the lowest density is Germany, where it seems from the survey (and my memory) that there is no legal penalty. See the next question for more on this. It's worth reminding you though that these two examples are not supported at all well by the small sample size.

This question looked at the legal penalties that respondents faced in their country and area. This information could've been obtained from legal documents on the Internet, but this manner of research shows to what extent the law affects zoophiles, and how aware of it they are.

Worth note is that in the above table all of the US states have been grouped together, while in reality the laws differ quite markedly between them. The most obvious fact here is just how little zoophiles know about the laws that affect their sexuality, 25 of the 49 respondents indicating that they don't know what laws apply. As far as I know, all countries besides the US have a single set of laws governing all areas, but still not once do you get 100% agrement.

Also apparent is that the UK is the most severely penalising country, with respondents indicating a monetary fine, ban on keeping animals and prison sentence all possible. I live in the UK, and as far as I know this prison sentence can in theory be a life sentence. The most liberal countries here appear to be Germany and Poland, both of which most likely have legislation in place to prevent animal cruelty.

I intend to embark on some research to establish the facts on this issue, and I will publish my findings separately.

Acceptance of homosexuality and zoophilia

Doubtless there will be those who disagree with even the mention of homosexuality here, but being both homosexual and a zoophile myself I can see there are parallels, and I believe where society's attitudes are concerned they're similar enough. Regardless, this question looked at the level of acceptance that each respondent saw towards homosexuality and zoophilia in their country and area. The responses are summarised in the table below, showing responses by both country and US state. (The figures are achieved by equating responses with values, and from this deriving an average figure which indicates how accepting an area is)

In the above data, the USA, UK, Canada and Australia are the most statistically reliable countries, and California, Florida, Colorado and Ohio the most reliable states. I'll concentrate on these, using the data sorted by average value and comparing the positions of countries and states between the two sets of data.

The USA came 5th in the first set of data and 7th in the second set of data, moving only two places. The UK moved more significantly, rising from 10th to 5th. Canada and Australia moved less, from 4th to 6th and 3rd to 1st respectively. In the states, there seems to be more movement. California moved from 7 places from 1st to 8th, Florida stayed at 6th place in both sets, Colorado moved from 5th to 8th, and Ohio moved from 14th to 12th. It's worth pointing out that because a lot of the states had similar averages, the sorting order is less significant.

Active as a zoophile

A second question looked at how concerned respondents were about their sexuality, the results of which are shown above. The relative high number of respondents not answering this question indicates that there was indeed some ambiguity to the previous question. But ignoring this for now, it's obvious that few respondents concern themselves so much with their sexuality, probably because of a deliberate separation from society and relatively small legal risk.

This question, one of the more revealing here, asked whether respondents believed zoophilia should be legalised or not. The results shown below indicate that the general consensus is a resounding definite yes. I suspect that most people's instant reaction to this is a yes, but the next two questions which ask for respondents to substantiate their stance show that most were able to come up with significant disadvantages to legalisation.

These next two questions were worded slightly differently to the previous (a wider acceptance as opposed to legalisation), not deliberately but with interesting result. Most respondents could come up with plenty of valid advantages to a wider acceptance, the most common of course being essentially selfish in motivation, including an ability to be more open about sexuality, and reduced or no legal penalties if caught. Other advantages mentioned included a better understanding of zoophilia, animal rights and animal needs. One particular respondent talked of the practice of some animal owners hiring out their animals to men for sex, and suggested that a wider acceptance of zoophilia would reduce this practice, though I must say I think the reverse might be the case.

There were five respondents who stated that they couldn't think of any real benefits, and of these two had only seconds earlier said that zoophilia should definitely be legalised. Of the remaining three, two said it shouldn't be legalised, and one didn't answer the previous question.

Again most respondents here had disadvantages that were selfishly motivated. I'm not saying this is necessarily a bad thing, it's what you would expect in a survey of this nature. What was a bad thing in my opinion though is just how few respondents cited increased animal abuse as a disadvantage. Only 10 of the 38 who responded to this question mentioned this. Of course it's possible that I'm wrong, and that there isn't a risk of increased animal abuse, but it's a disadvantage that swings my decision. The most common disadvantages quoted include increased attacks on zoophiles, and reduced privacy. I'm not sure about the privacy thing, but it's certainly true any wider acceptance would mean that zoophilia becomes a real target for those who believe it's a problem, whereas at present it's largely not even acknowledged. There certainly aren't any organised campaigns against zoophilia that I know of.

The above table shows a summary of respondents asked how willing they were to stand for increased acceptance. The responses here match the responses to the earlier question on how concerned zoophiles were about their sexuality; 38% of respondents who are not concerned about their sexuality are also not willing to stand for greater acceptance, compared with only 25% of those who are very concerned.

As was suggested by several respondents to the previous survey, an option was included for respondents to include additional comments, and I was suprised to find that almost two thirds used it. Also, a lot of the feedback I got through this was quite relevant and useful. It seems the general feeling amonst respondents is one of defiance; the famous quote "love knoweth no locksmiths" seems to apply here. But at the same time there's a lot here that doesn't sound the words of people with choices. One respondent stated that he was unable to be around the species he was attracted to, and that if he couldn't by 45 he'd commit suicide. (He and I talked soon after) Other respondents talk of how they couldn't imagine themselves being anything other than zoophiles, one stating quite succinctly, "Love conquours all, and for the rest of my life when I think of something I love it will always be a Horse."

This article is the very nice work of Muse's Zoo Research and can be read here in it's full context.